Welcome to our Featured Founder series, where you’ll meet startup founders from Tampa-St. Petersburg who are building and scaling their ventures to solve some of the world’s greatest challenges. We interviewed Johnny Crowder, Founder and CEO of Cope Notes, a text messaging tool that helps improve mental and emotional health. 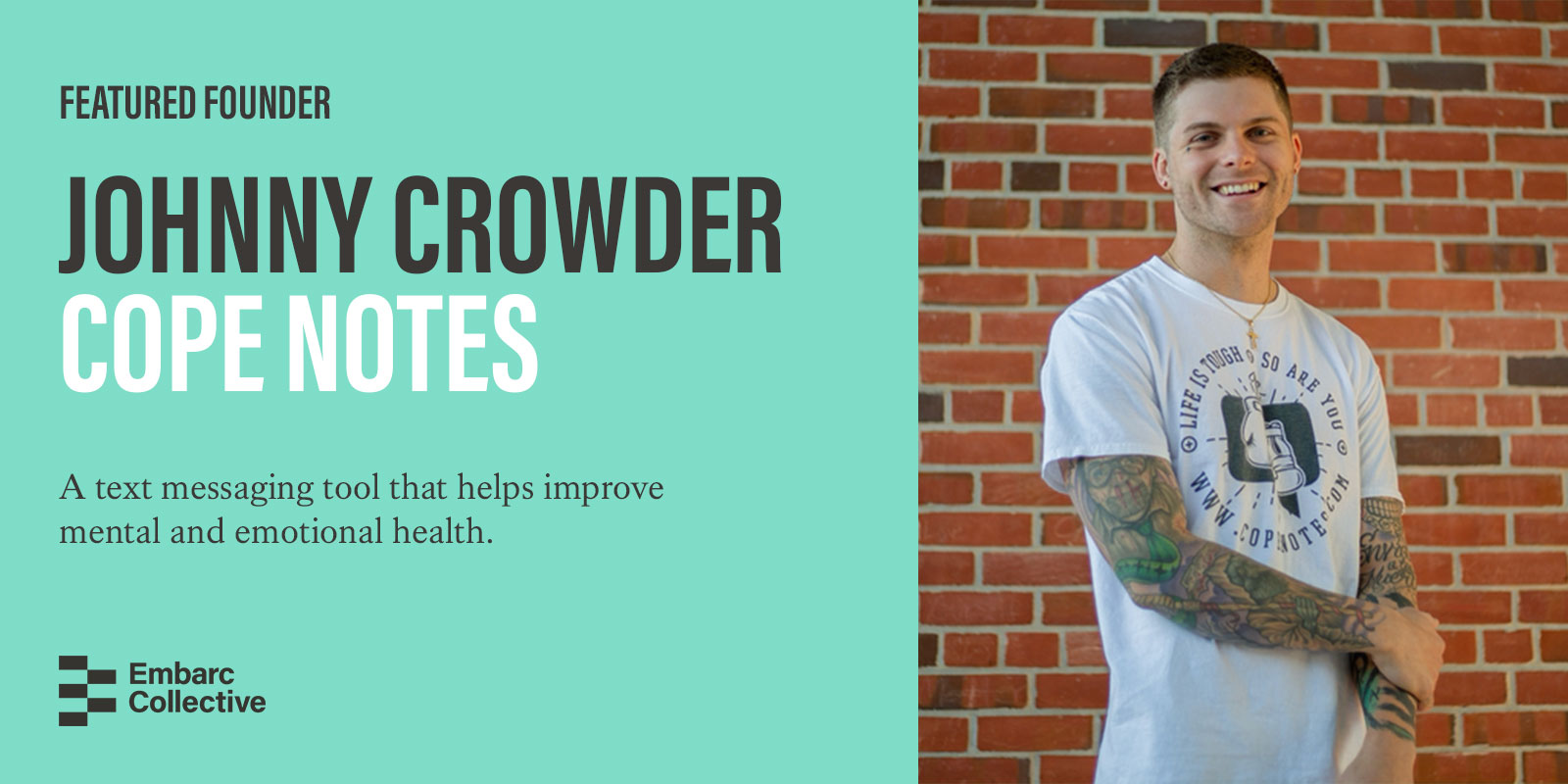 My employment history is an interesting one. I’ve toured in a metal band and volunteered in the mental health field as a speaker and advocate for 10+ years, but neither of these things paid the bills. To make ends meet, I did a lot of writing, editing, creative direction, and design for different firms and agencies over the years. Cope Notes is the third iteration of something I’ve been trying to build since 2015, and ultimately, I think the idea was born out of pure frustration. As someone who spent over a decade in treatment for mental health conditions, I can’t explain to you how badly I needed a tool like Cope Notes. About 5 months after launch, I quit my ad agency job to run Cope Notes full time - one of the toughest (and most rewarding) decisions I’ve ever made. I always knew I wanted to use my writing and creative skills for something bigger, I just never knew what it would look like.

I could rattle off a laundry list of pain points associated with seeking mental and emotional health support, but in the interest of keeping this answer shorter than a novel, I’ve narrowed it down to a few. In my personal experience, if any given tool ever made it past my skepticism radar, it was too expensive, it was too inconvenient, it was too inconsistent, it was too invasive, it wasn’t peer-based, it collected my personal data, and beyond all of that, it relied on me to make the first move. And when you’re struggling with anxiety and depression, motivation doesn’t grow on trees. Cope Notes is the answer to all of these complaints and more. There are gaps in the treatment model - that much is plain to see. We’re just trying to fill them.

As for excitement, knowing that I get to dedicate my life to stopping the very thing that almost ended it is so astounding to me. I never thought I would get a chance to contribute in this capacity. Every day, I wake up knowing that I’m doing something that’s making a difference in thousands of lives all over the world, and nothing is more important to me than that. People are still alive today because of what we do! Cope Notes has allowed me to turn my personal pain into something that alleviates that same pain in the lives of other people, which makes every second of my suffering worth it ten times over.

Coming from a creative/psych background, I can admit that I was ill-equipped to handle some (all) of the technical components of Cope Notes. I didn’t know anyone who was willing to take on that role at the time, so I was left to my own devices. Lots of google searches, YouTube tutorials, pouring through forum threads, and asking a bunch of people in my network for their input. I wound up repurposing some marketing software just to get the original proof of concept off the ground, which was very clunky and required a massive amount of manual labor. This, as you can imagine, led to a giant margin of human error. Eventually, my now-CTO Mat reached out to me and offered up some help, but for months on end, I was floundering on the tech side. Long story short: Everyone has a weak spot, and mine was tech. Overcoming it took a willingness to be wrong and a LOT of humility.

When we started out, we were pretty squarely B2C-focused, but that has changed rapidly over the last 2 years. We’ve been focusing more and more on integration with other platforms, agencies, care providers, insurance players, school systems, employers, and community mainstays to establish strategic partnerships. When you work in a field like mental/emotional health, you can’t view it like a field full of competition - these “competitors” are really teammates. We’re all fighting for the same cause, trying to protect, serve, and support the same people. Teaming up with them to strengthen the network of care is only going to foster a safer environment for the people we’re trying to help, change, and save.

Don’t waste your whole life trying to do something perfectly out the gate. It’s okay to start sloppy. It’s okay to pivot almost immediately. It’s okay to scrap your original idea, rebrand, and start again. Your company is not you. YOU are you. Don’t let your identity get so lost in what you’re building that you fiercely defend your own idea instead of accepting its newest, most effective form. Get used to the idea of being wrong, and embrace it. (This is advice I give myself on a daily basis.)