Welcome to our Featured Founder series, where you’ll meet startup founders from Tampa-St. Petersburg who are building and scaling their ventures to solve some of the world’s greatest challenges. We interviewed Erik Maltais, CEO of IMMERTEC, a real-time 3D virtual reality communications platform that allows professionals to seamlessly train, consult, and observe anytime, anywhere. 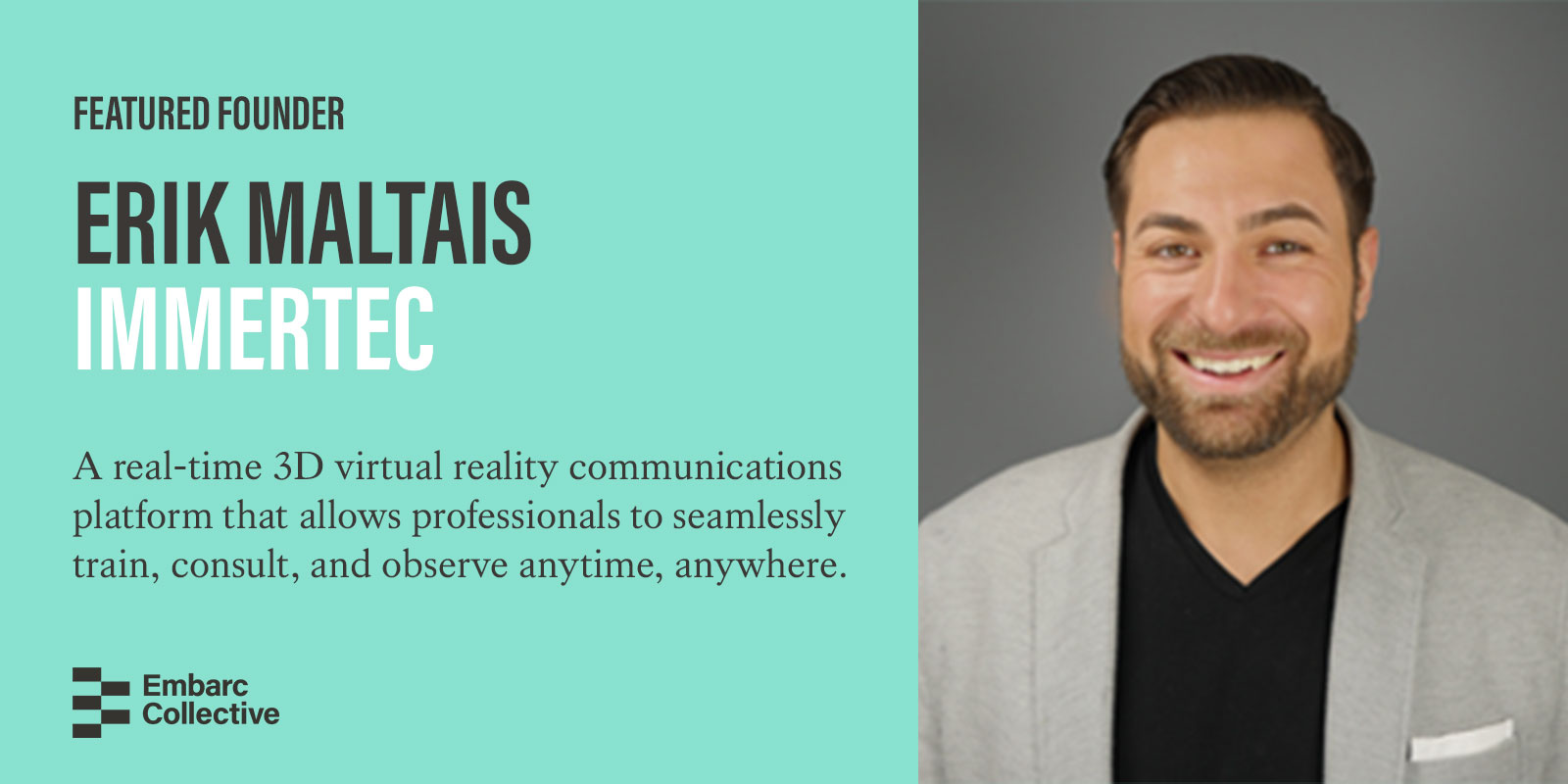 My first splash into the deep-end of adulthood was a 5-year tenure in the Marines, where I served as a machine-gunner in Iraq, Diplomatic security at US Embassies, and POTUS security during W Bush international travels. After the Marines, I matriculated at USF to study Accounting and Economics. I then went on to launch a private label e-commerce business, which I grew from 5K to 7-figure sales in less than 3-years.

My Co-founder, Jon Clagg, is a visionary full-stack developer with over a decade of experience in automation and telecommunications. In 2012 he received one of the early access developer kits from the Oculus Kickstarter campaign. He started as an enthusiast, but his ambition quickly grew far beyond.

Even at this early stage of the industry, Jon had two profound intuitions about the future of VR, which formed the “why” necessary to quit his high paying job as a developer and commit fully to building his vision over the next 5- years. One, VR was going to be much more than video games and cheap experiences. And two, similar to the TV, internet and cell phone industries, this industry would be led by companies that focus on creating real-world business value first.

When presented with the opportunity to work hand-in-hand with Jon and to create the business foundation to support his vision, I immediately accepted. After leveraging the many reports from Goldman’s, Citi and countless other SEC compliant industry reports, we identified training as the best and most obvious way to create this business value. Diving deep into what it took to create 3D training content in VR, it was immediately evident to us that the existing methods were too slow, laborious and subsequently lacked scalability.

We knew creating a scalable training business in VR would require technology to create 3D content and connect people at the speed of business. This was the bases of the solution we built. Our tech allows companies to disrupt the way they train by leveraging technology, instead of large development or production teams, to provide their customers and employees with access to observe, collaborate and learn from real-world, real-time training opportunities in VR without the burdens of in-person training.

We are a software startup solving the serious global issue of limited access to safe and affordable surgery. A problem which is only getting worse as more and more doctors suffer from physician’s burnout.

According to the World Health Organization (WHO), five billion people are without access to safe and affordable surgery. This problem is responsible for nineteen times more deaths than AIDS and tuberculosis combined. To reach WHO ambitious goals in tackling this issue, we have to double the number of trained physicians by 2030. This is only possible by disrupting the way physicians train and increasing access to real-life, real-time surgical training experiences without the burdens of traditional in-person training. This is exactly the problem our software solves, and the “why” that compels our team to action.

Communication and connection. These are my challenges. This is always the challenge in my opinion. Life is about people. The better I learn to communicate and connect with other humans the more value I create.

This challenge makes up two-thirds of the books I read and is the foundation of our company culture.

One of those books, which I Highly recommend: “The NEW one-minute Manager”

While our development team focuses on further developing our technology and maintaining the bleeding edge of what is possible for remote training, we build a culture and sales strategy that can keep pace. Our company goals are just as ambitious as the initial vision of our CTO. We seek to scale access to real-world, real-time training in healthcare and eventually much more.