Welcome to our Featured Founder series, where you’ll meet startup founders from Tampa-St. Petersburg who are building and scaling their ventures to solve some of the world’s greatest challenges. We interviewed Michael O'Rourke, Co-founder of Pocket Network, a platform that makes it easy for every developer to interact with any blockchain. 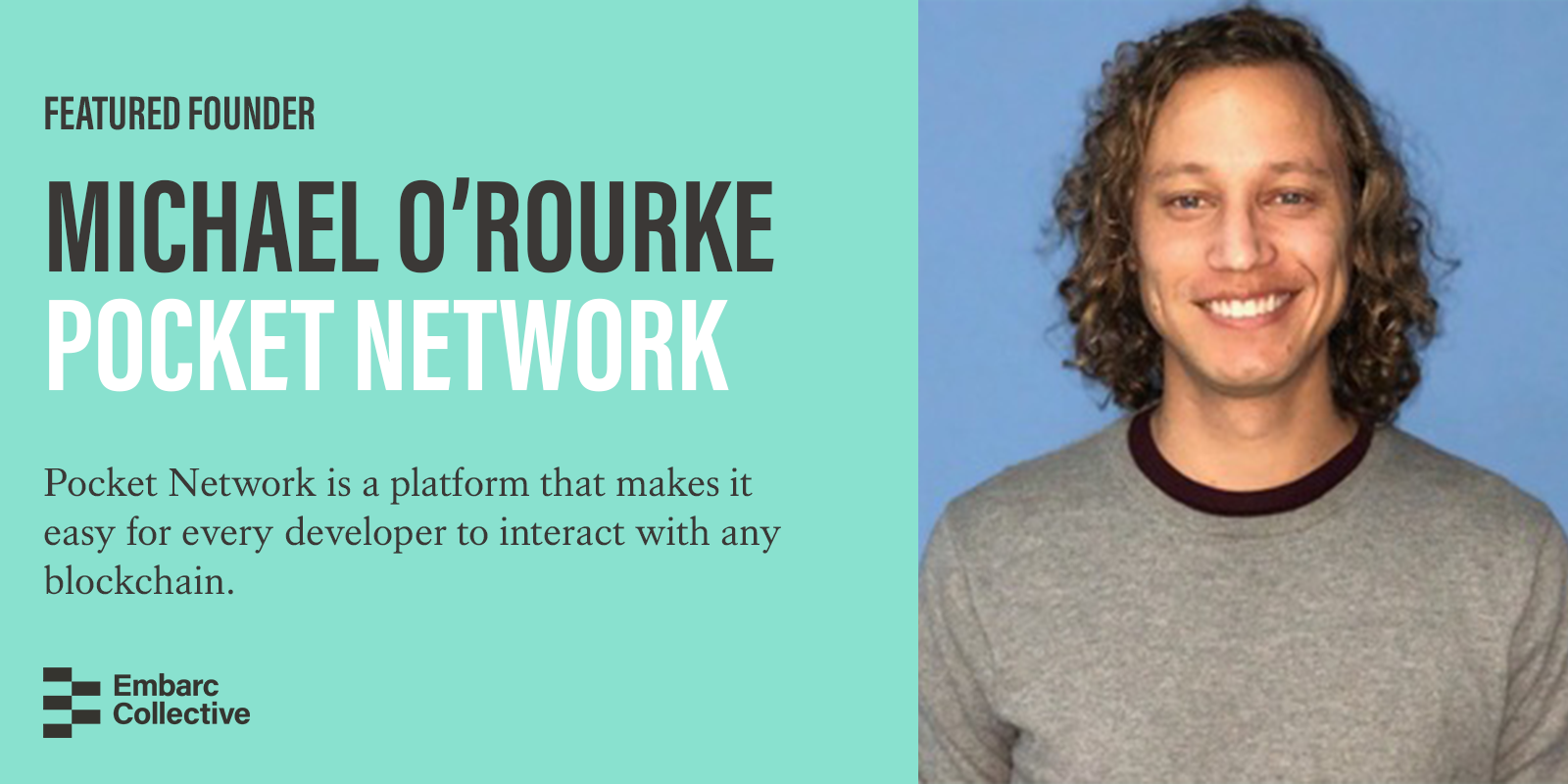 I was working as an iOS developer at a small software shop in Sarasota. They were amazing people to work for, but I was only there for 6 months before I left to start Pocket. Before that job, I had met my cofounders at a previous startup in Sarasota working as an iOS developer for about a year. Luis, Pabel and Valeria did not have a car at the time and because we lived in the same apartment complex, the four of us drove together 25 minutes to and 25 minutes back from work every day. Pocket was born in those (sometimes hour long) car rides.

Bitcoin and Ethereum kept coming up until eventually, it dominated conversation the entire time driving to and from work. We started to get really excited about the possibilities and began out planning a project called TelCoin - A way to tokenize your cell phone data so you wouldn't have to buy a new phone or SIM card when traveling. We envisioned a market where you would fly to Paris using our MVNO service, and locals would sell you data as needed through the blockchain. We dug for several months and realized that the industry was far too immature for this kind of a project. Scalability and infrastructure was not there!

This research eventually led us to Pocket. Around the same time, we started reading about countries like China, Brazil, Egypt, UAE and Iran (info here and here) banning Whatsapp and Signal due to their encrypted messaging. Signal even tried this clever trick called domain fronting, where they hosted their servers on Google's cloud, and every Signal message looked like a Google search. Eventually, it got shut down. This led us to understand the importance of a decentralized network of people running full nodes, serving other decentralized application data as core infrastructure. Along the way, we've realized other important implications of a successful protocol like Pocket as well.

Pocket makes it easier for blockchain developers to create decentralized applications by saving them many dozens or hundreds of hours not having to run a full node for a blockchain. While more sophisticated blockchains like bitcoin and Ethereum have made the transition into the cloud, most don't have that infrastructure advantage. Every new blockchain has to figure out their infrastructure from scratch, and Pocket is the solution for that. Right now, developers have to run their own physical nodes to create their decentralized applications to test and launch them. Pocket Network provides an incentive for people to run it for these developers.

Knowing that I'm going to learn something new every day. We are in the bleeding edge of this industry. When I or one of the team has a new insight from something they read or some conversation we've had, nothing gets me more excited. If you're addicted to learning, being in blockchain is the most rewarding industry to be in. To build in this space you need a full spectrum of technical and non-technical skills that previously were isolated to specific verticals, this space combines them all!

Name the biggest challenge you faced as you’ve launched Pocket. How did you overcome it?

Though we knew that the issue of decentralized infrastructure was a problem, it wasn't completely clear how we were going to solve it in June 2017. Explaining the idea to people in the blockchain space, much less selling it was a challenge. We've built several versions of our product, while reaching out to potential customers seeing what worked, and what didn't. A year and a half of research and iterations later we're getting real partnerships and traction using our product along with incredibly smart people working on the core protocol.

I would attribute the traction we're getting now to quick iterations and being honest with ourselves as a team with what is working and what isn't. Not letting our egos get in the way of what we thought was a good idea, and not being afraid to experiment down a path of research that led to a dead end.

Persistence. No one will care or understand the magnitude of what you're building at first. Keep talking about it, keep pitching it to everyone, and be humble about what's not working or when you're wrong. Double down on what is working and you'll start to notice when potential customer's eyes light up.

Learn more about Pocket Network on Twitter and LinkedIn.