Welcome to our Featured Founder series, where you’ll meet startup founders from Tampa-St. Petersburg who are building and scaling their ventures to solve some of the world’s greatest challenges. We interviewed Marcus Howard, Co-founder and CEO of ProjectMQ, a social media platform that connects indie game studios with gamers and fans worldwide. 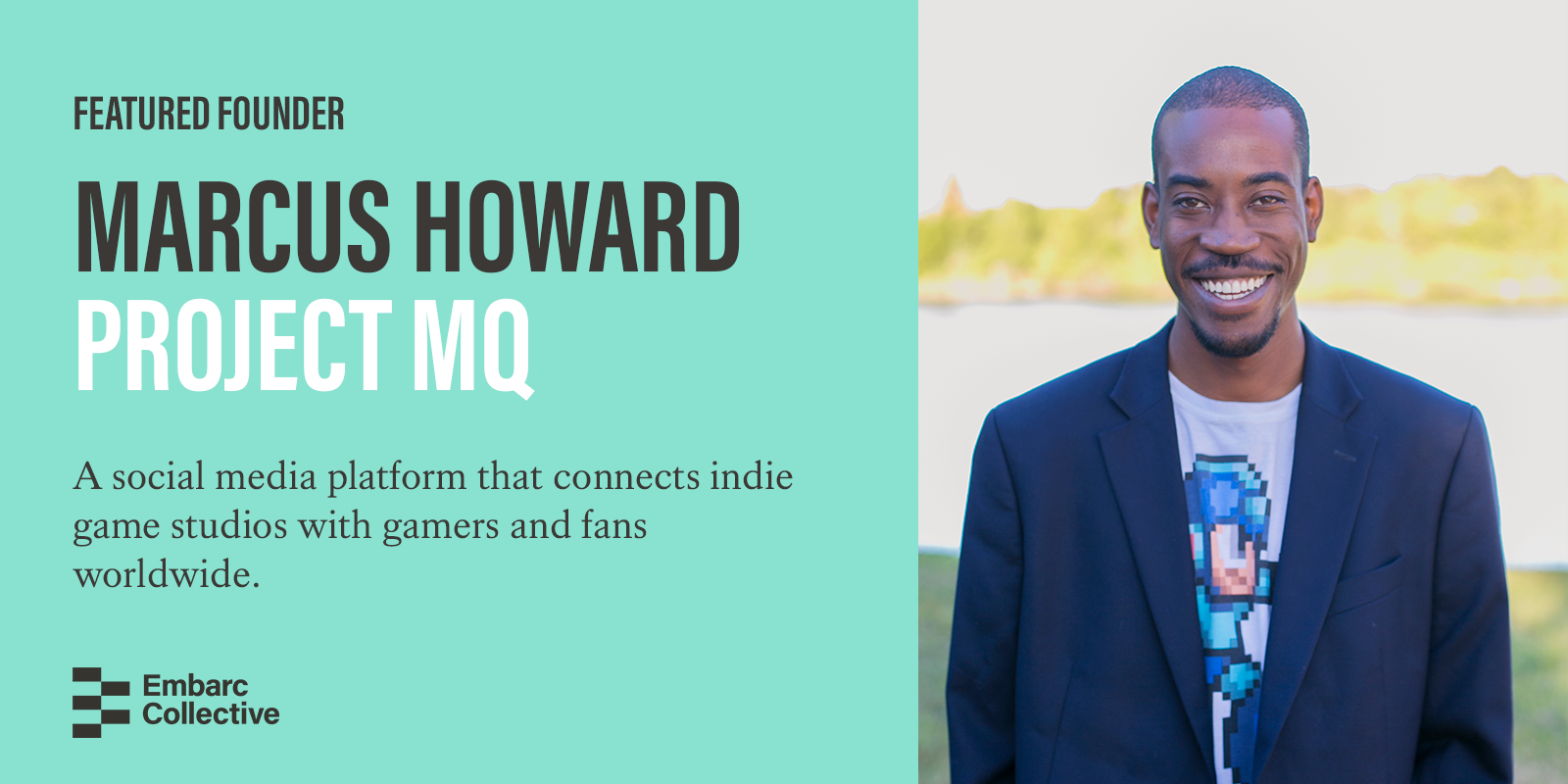 Before launching ProjectMQ in March of 2013, I worked as an Information Analyst at Georgia Southern University, in the Business and Finance IT Division. We supported several large departments, including the Bursar's Office and Athletics, but we only had 3 people on our team, so I wore many hats. While working there, I did everything from implement a campus-wide electronic procurement system, to pressure washing the scoreboard at the football stadium. It was an excellent opportunity to learn many of the business functions of an organization with 5,000 employees and 20,000+ student customers. Since July of 2013, I've been working full-time, as a full-stack web developer for MenuPad. My identical twin brother Malcolm and I didn't have the network for the typical "friends and family round", so we've spent the last 5 years bootstrapping ProjectMQ with the salaries from our day jobs.

Video games inspired me to launch ProjectMQ, just like they inspired me to pursue a technology degree and career. Malcolm and I got "Super Mario Bros. 3" for Christmas when we were six, and we've been playing video games ever since. During our 9th grade year at Magnet School, we learned that our TI-83+ graphing calculators could play video games. Suddenly, we connected the dots between software development and video games: games are apps, just like Facebook and Uber, except their purpose is entertainment and engagement. We even began programming our own video game on those calculators; it would have been a Zelda clone, but our Calculus teacher deleted the memory from our calculators. Malcolm and I taught everyone else in our class how to install games on their calculators too, and apparently, the kids in the class were spending more time playing games than listening to the teacher. She fixed that problem, by resetting the memory on everyone's calculators while we all were at lunch.

Fast forward about 10 years: Malcolm and I both had our undergrad degrees (Computer Science and Information Technology, respectively). Though we still loved playing video games, we didn't have a way to easily share awesome video games with our friends. We figured that someone else would eventually come up with a way to connect people with games, the way that Facebook connected people with other people. After several months (and eventually, years) passed, we got tired of looking for a solution, and finally decided to try and build one ourselves.

We originally wanted ProjectMQ to be for both big-budget (i.e. AAA) and independent (i.e. indie) video games. However, we pivoted the idea, after a trip to the 2014 Electronics Entertainment Expo (E3) in Los Angeles. There, we learned that most AAA studios weren't interested in the platform we were building. They already had established audiences for their games, and marketing resources to promote those games. Though, indie studios loved the concept, because they didn't have established audiences or marketing resources. That's when we redefined ProjectMQ: all platforms, all genres, only indie games.

What pain point is your company solving? What gets you excited to go to work every day

Every day, great independent (or “indie” for short) video game studios are doomed to fail, because game discovery/visibility is terribly broken on computer, mobile, and video game console marketplaces. Though nearly 70% of video games are made by independent game developers, indie games only make up 2% of the revenue in the $116B global gaming industry. Indie developers/studios struggle to build a social audience and sell their games, even though more and more gamers seek unique interactive experiences. Most indie studios are typically bootstrapped startups, working on their indie games outside of their full-time jobs. Since they have shoestring budgets, they usually don't have marketing budgets, and can't afford the publicity of more popular games like Fortnite and Red Dead Redemption 2. ProjectMQ helps indie devs sell more indie games, and helps gamers more easily find video games they'll love.

We're making a real impact in the gaming industry, and that keeps me motivated to keep working every day. The game discovery problem is so massive and critical, that it's now commonly referred to as the "indiepocalyse". Steam is the largest PC distribution platform for video games in the world (outside of China), and even they weren't able to fix this problem. With a new game launching about every 20 seconds, if a scalable discovery solution doesn’t arrive in the market soon, most of the indie game segment could collapse. Since indie developers make up nearly 70% of the video games on the market, a collapse of that segment could be catastrophic to the industry.

It's definitely a daunting task, to build a successful discovery solution, when many well-funded companies have already failed in the past. Thankfully, our customer feedback - from indie devs and gamers - indicates that we're on the right path with our unique approach. A couple of year ago, one development team wrote to us, saying that ProjectMQ helped their team turn their part-time game development hobby into a full-time career. Recently, I demoed our site to a gamer, and when they saw the trailer for one of the games on our site, their response was "Oh sh*t, that's indie?". The indie devs that we work with, will occasionally describe the rewarding feeling they have, when gamers enjoy the creative concept they've spent years working on. We get that same feeling, when gamers are surprised and delighted by the games they find on our site. Our mission with ProjectMQ is "To connect, support, and grow the global indie game community". Each time we're able to contribute to a successful indie game launch, or introduce a gamer to a new game that they love, we know we're making progress on our mission. You have to learn to celebrate the small wins; in the startup world, small wins can make all the difference.

Name the biggest challenge you faced as you’ve launched ProjectMQ. How did you overcome it?

Funding, hands down, has been our biggest challenge. My brother and I are grateful for all of the progress we've made with ProjectMQ, since we began in March 2013. We've been able to complete our MVP (minimum viable product), and build a community of nearly 40,000 indie game friends around the world. However, because we've been unable to secure external funding to focus on ProjectMQ full-time, it's taken us 6 years of part-time work to reach our 2 year goals. Unfortunately, Malcolm and I didn't have the network to do the typical "Friends and Family" round. Instead, we've self-funded ProjectMQ, with the salaries from our full-time jobs. After investing over $100,000 of our own money to build the MVP and validate the product market fit, we turned to accelerators in an attempt to connect with early-stage investors. In the last 3 years, Malcolm and I have travelled to around the country (Georgia, Florida, North Carolina, Illinois, Pennsylvania, Massachusetts, Texas, California), participating in pitch competitions and other startup programs. Despite the fact that we've graduated from four startup accelerators, including two from the prestigious GAN network, we've failed to raise our modest angel round.

To overcome that challenge, we first needed to understand it better. As it turns out, our fundraising obstacles aren't unique. Less than 1% of American venture capital backed startups are black: https://www.cbinsights.com/research/team-blog/venture-capital-diversity-data/. To further complicate our situation, the average investor doesn't understand the value of the video game industry, and less than 1% of the global population understands blockchain. If those are concentric circles, we're looking at a tiny probability of fundraising success. With better knowledge of our odds, we were able to identify and pursue more reliable funding solutions: startup grants and competitions. In the last 3 years, we've won $26,500 in grants from startup competitions. That filled some gaps, but the ultimate solution was to be more strategic about our operations, and limit our expenses as much as possible. Minus the occasional legal bill, we've managed to reduce our burn rate to $500 per month. We're staying frugal with our expenses, so we can afford to keep growing ProjectMQ as long as possible.

Our goals for ProjectMQ in 2019 are to expand the functionality of the platform, expand the platform's digital distribution, and expand ProjectMQ's brand. To improve the site's functionality, Malcolm plans to implement an API, so that we can make ProjectMQ's catalog of excellent indie games available to third party sites. Next, we plan to use that API to complete our mobile application in the Unity game development engine. This will allow us to publish the ProjectMQ mobile app to all computers, laptops, mobile devices, gaming consoles, and smart TVs. Finally, as iHeartMEDIA's official Esports partner, we'll continue building out their gaming events in their 150+ markets nationwide. That should help us establish ProjectMQ's physical brand footprint, in addition to our digital one.

Give us a tactical piece of advice that you'd share with another founderjust starting out.

Aim small, miss small, fail fast, learn, and then repeat. Whatever product, feature, or strategy you have in mind, you should try to figure out a way to test it with 5% of the time and money you had planned. We've burned two of the last 5 years, investing resources on initiatives that didn't work out, when we should have prototyped them first. When you're short on time and money, a quickly failed prototype is the best gift you can get.