Welcome to our Featured Founder series, where you’ll meet startup founders from Tampa-St. Petersburg who are building and scaling their ventures to solve some of the world’s greatest challenges. We interviewed Bobby Quinn, the founder and CEO of Raven Spatial, a geospatial intelligence company that specializes in crowdsourced drone and smartphone imagery collections. 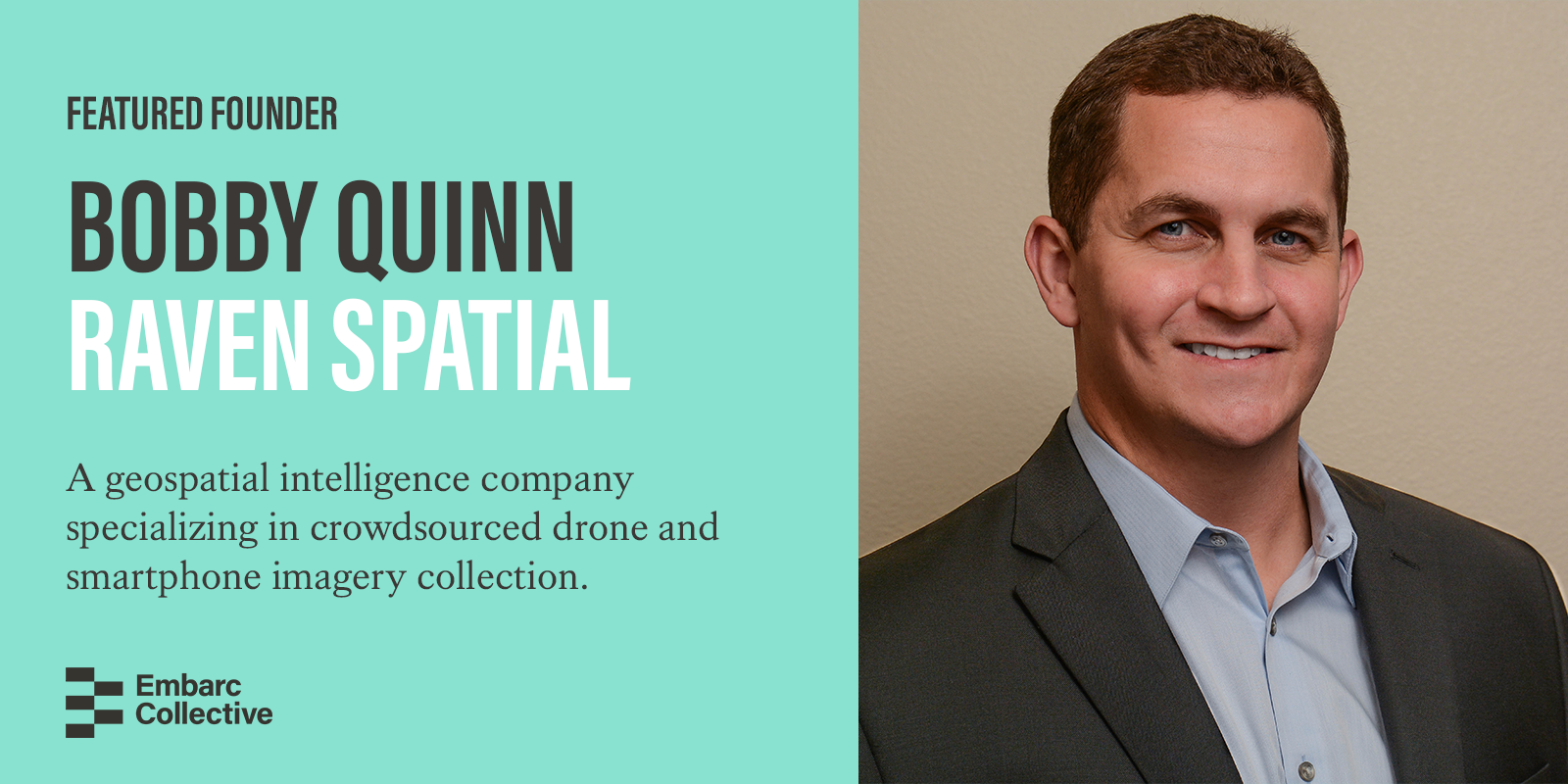 I flew UAV’s for the US Navy’s Special Surveillance Program in Afghanistan between 2012 and 2014. Following my deployment, I hired on with DigitalGlobe, the world’s largest commercial satellite imagery company, as a geospatial analyst.

During my time with DigitalGlobe, I had to identify several small features (e.g., weapon emplacements, small vehicles, people, temporary shelters, building damage, etc...) in satellite imagery but was severely limited by the low resolution of satellite imagery at that scale. This is a common problem for anyone who uses imagery for analysis. All too often, analysts make best-guess assumptions about the features they’re trying to identify. Drone imagery could provide a much needed “microscope” in this situation, allowing for imagery at ten times the resolution of satellite, but no one in the drone or geospatial industries were appropriately trying to solve this problem. The error in best-guessing important analyses can cost millions of dollars, and in some cases, lives.

What pain point is your company solving?

Soon after hiring on with DigitalGlobe, I realized that drone imagery was not being leveraged appropriately throughout the geospatial community. There’s an increasing trend in using drone imagery to overlap imagery from other sources for geospatial intelligence, but the major pain is the lack of a single-point ordering solution for georectified drone imagery without major geographic restriction.

Currently, the most popular business model in the drone imagery industry is collection by local companies with their own drones and pilots. But this model doesn’t scale well, and companies or government agencies needing imagery across a broad geographic area (country or continent-scale) would have to find several different companies to fulfill their requests. Our model is different. We use crowdsourcing to rely on the widespread availability of low-cost consumer-grade drones to collect imagery for our customers. Drone owners who have downloaded our app will be notified of available flight plans near them. We generate the flight plans that our crowd of pilots will fly for us, standardizing the image collection process. We then process the resulting imagery into GIS-ready imagery that can be used immediately for location intelligence by customers ranging from oil and gas companies to government intelligence agencies.

What gets you excited to go to work every day?

My company is solving a very real problem on the edge of technology in a booming industry. The magnitude of impact we will have on this industry if we are successful is hard for me to fathom right now. I know the problem intimately, and can clearly see the solution. The thought that our platform could effectively save companies millions or that we might help save lives is like having rocket fuel in my tank.

Name the biggest challenge you faced as you’ve launched your company. How did you overcome it?

Selling an idea, even if it’s awesome, is difficult without a product to demonstrate. Having a complex business model adds to that difficulty. Investors have a short attention span, especially for pre-revenue startups. As far as overcoming that, I’ll let you know how I did that when we get to our seed round in March!

We just kicked off our friends and family capital raise round last week. We’ve partnered with a local dev shop to carry out the development of our platform, with a demo due in March of 2019. We’ll open a seed round just before the MVP launch, which will allow us to fine-tune our platform, add essential post-MVP capabilities, and recruit our crowd of users. Being able to demo to the government and military customers will be a key component of traction for us.

Be tenacious and always strive to move forward. Don’t bog yourself down with analysis paralysis. Take each “no” as an opportunity to grow, and drive on. Balance confidence with self-awareness. Be kind and helpful to as many people as you can; business karma is a very real thing. Always take care of those people who helped you along the way, and never forget their contribution to your success.

Learn more about Raven Spatial on LinkedIn and Crunchbase.